Water is a growing concern in Oregon and Oregon agriculture, and it was the focus of the Agri-Business Council of Oregon’s Annual Meeting on January 24 at the Hart of the Garden Building on the Oregon State Fairgrounds. A special panel was assembled, featuring Kevin Masterson, Toxics Coordinator for DEQ, Lisa Hanson, Deputy Director for the Oregon Department of Agriculture, Allison Hensey, Food and Farms Program Director for the Oregon Environmental Council, and ABC member Brian Nakamura of Nakamura Orchards. Steve Shropshire of Jordan Ramis P.C. was the moderator, and the panel was followed by a speech from Phil Ward, Director of the Oregon Water Resources Department. Together, they delivered a message about what it will take to improve and maintain a resource that’s important to everyone. 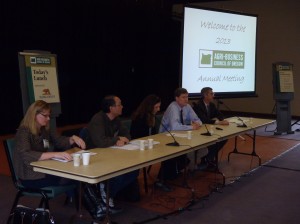 Improvement is the first part of that and it’s a major part in the overall process ahead. “There’s a lot of discussion around water quality,” Hanson says, “it’s an ongoing discussion about what it is, what it isn’t, what it looks like today and what it should look like in the future.” Around 20 percent of Oregon stream sites now have significantly deteriorating water quality, after seeing an improvement from 25 percent to 50 percent between 1990 and 2004. As point sources have been heavily regulated, the opportunity for improvement lies with nonpoint source pollution, where agriculture is a contributor. Every contributor needs to do their part, and agriculture has the opportunity to show that it’s doing its part.

Reducing nonpoint source pollution involves monitoring the water and the land. Landscape conditions that landowners can address include allowing vegetation to establish, preventing and controlling erosion, providing stream bank stability, keeping sediment out of the water and keeping banks from sluffing off due to agricultural activity. “There are conditions that need to be on the land, and if those conditions are met then the assumption is agriculture is doing its part to meet them,” says Hanson. Improving conditions on the land will show up in the data DEQ collects from the water. Monitoring the water involves collecting samples which are analyzed for various water pollution issues. This information assists in evaluating achievement of Total Daily Maximum Loads or TDMLs, the maximum amount of a pollutant that a body of water can receive and still meet water quality standards. One type of pollutant is pesticides.

“With regard to nonpoint sources of pesticides, agriculture is looked at as a likely contributor but it’s also the sector where we’ve seen the most significant improvements,” says Masterson.

Unlike point source management this improvement process is not a regulatory endeavor, rather a collaborative one. That collaboration comes from a succession of bills and programs that have created the opportunity for agriculture to tell its story now and in the future. Current efforts are rooted in the passage of Senate Bill 1010 in 1993, creating the Oregon Agricultural Water Quality Management Act to ensure the state is meeting water quality standards. This act laid the framework for agricultural operations to address water quality problems in watersheds.

In addition, today there are seven watershed-based Pesticide Stewardship Partnership (PSP) projects in Oregon in the Hood River, Wasco, Walla Walla, Pudding, Clackamas, Yamhill and Amazon watersheds. The PSP program is a voluntary program led by DEQ and the ODA. Its key steps are focused on monitoring surface waters from drift and runoff for current use pesticides, identifying streams with elevated concentrations or a high number of detections, collaborating to implement voluntary management practices and doing follow-up monitoring to determine improvement over time. Collaboration is perhaps the most important part of this process, as it involves several different groups. 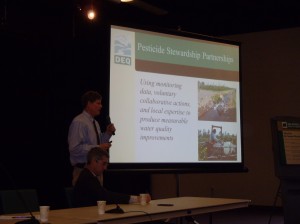 “If every one of these entities is willing to participate and be at the table, we can have a lot of success,” says Masterson.

What this program is capable of can be seen in the Hood River PSP, its pilot program. Surface water monitoring from 1999 to 2000 showed exceedances of water quality standards for chlorpyrifos, a current use pesticide, in Lower Neal Creek. Rather than pursuing regulatory action, the decision was made to engage growers, technical assistance providers and others to collaboratively address the issue. Alternative pesticides, improved application practices and monitoring all helped lead to a significant reduction in concentrations and frequency of detections from 2000 to 2011. Similar reductions in pesticide concentrations have been achieved in the Walla Walla watershed recently.

Data like this is the reason that top-down, one-size-fits-all regulatory actions have not been developed. “Water, water, water, whether water quantity or water quality and data, data, data show us what you’re doing and show us how it’s working,” says Hanson. Something Brian Nakamura of Nakamura Orchards knows all about. He was one of the leaders for a project funded by an EPA grant to help make water quality improvements in the Hood River watershed. The first part of that project was a collective survey of the Columbia Gorge Fruit Growers.

The survey was conducted to see if they were aware of the practices available to modify spraying in order to minimize drift. Its outcome was a best practices handbook that was developed and passed out to all of the growers. This process, and continued collaboration, has made a difference since the survey. “In the Hood River Valley, once the waterways started getting tested by DEQ, it was apparent that it was better to engage in a collaborative effort with agencies,” says Nakamura.

Through grants they’ve been able to keep monitoring to see how well they’re maintaining their efforts. Nakamura has found that the experience is more positive if you join the conversation and urges others to do the same. “Don’t just sit back and have someone tell you how to do things,” says Nakamura, “get involved in trying to address some of these issues, work towards solutions, and move forward.” Participation is the best way to move forward and help address water issues, and that participation involves data. “We need data so we can tell your story,” says Hanson.

There have been plenty of individual conservation projects but there’s no way to quantify them, and it’s difficult to measure their impact. A watershed basis is the best way to measure changes and impacts to show that agriculture is doing its part. “With these pesticide management partnerships it seems that the more we can get information out about how we’ve been successful, the easier it is,” says Nakamura, “it helps out with talking to agencies and the public to show that Ag is trying to do the best they can.” Improvement is already showing, and more participation will lead to even greater efforts. 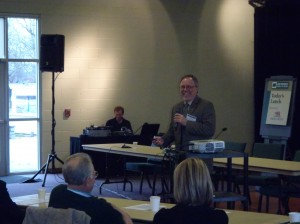 Maintaining these efforts involves planning for the future. Oregon’s 2009 House Bill 3369 charged the Oregon Water Resources Department with leading efforts to understand and meet all of Oregon’s water needs, instream, out-of-stream, above ground, below ground, now and in the future. As a result, Oregon’s Integrated Water Resources Strategy was born. The strategy will help Oregon understand and meet its water quantity, water quality and ecosystem needs, while taking into account coming pressures like population growth, changes in land use, and future climate conditions. Having a plan will be part of its success, but this objective also requires a stable and effective Water Resources Department.

“Oregon for the first time actually has a plan for meeting future water needs with the Integrated Water Resources Strategy,” says Ward, “it’s a road map for how we’ll meet water needs in the future, and it needs funding.”

Currently Oregon Water Resources Department is funded by the general fund, a fund which natural resource agencies have received less than one percent of from 2011 to 2013. In light of this, a more stable source of funding is needed. Senate Bill 217, being pursued in the 2013 legislature, would charge an annual fee of $100 per water right to all water rights owners with a cap of $1,000 for all agricultural customers. This would produce more stable funding, ensuring that the Oregon Water Resources Department can continue to do its part to meet Oregon’s current and future water needs. A cleaner and clearer future for Oregon waters is about everyone doing their part. There is much more to be done to preserve our waters, and it’s going to take each group helping the other to get there. Ultimately, it comes down to one thing. “It’s about telling the story of success in the future,” says Hensey.