Doing More With Less: The Future of Oregon Ag 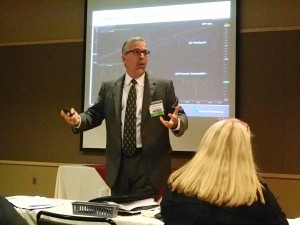 Andres Bergero, VP of Global Trade & FX Solutions at Bank of the West, shared what lies ahead for our economy and Oregon agriculture.

Oregon’s economy, Mexico’s declining farm labor supply and issues at the port all have significant bearing on the future of Oregon agriculture. These issues were the focus at the Agri-Business Council of Oregon’s annual meeting January 22 at the Silverton Wellsprings Conference Center in Woodburn. Three speakers were invited to present their findings, Andres Bergero, VP of Global Trade & FX Solutions at Bank of the West, Diane Charlton, researcher at UC Davis, and Curtis Robinhold, Deputy Executive Director for Port of Portland. Together, they touched on what Oregon agriculture must do to continue to thrive now and into the future.

Their main prognosis calls for several adjustments based on a variety of factors at hand. The current and future state of the U.S. economy being one of them. Bergero shared that overall, the year ahead looks promising. Our unemployment rate is decreasing, consumer debt is lower, the housing market is starting to come back and consumers are getting a boost from lower oil prices. “Consumers have more money to spend, so you can expand what you do,” says Bergero. All of these factors bode well, but the current economic climate is not without its challenges.

One effect producers will have to contend with is a higher GDP. According to Bergero, this puts importers “in the driver seat,” but leaves exporters scrambling to find techniques to overcome a strong dollar and stay competitive. While importers can expect more from a strong dollar than they could in years past, especially if they’re invoiced in that country’s currency, exporter’s products don’t look as attractive with a strong dollar. Bergero advises reducing costs, considering different terms, and renegotiating. All things that will need to be considered as available labor continues to decline.

Job trends show that labor will continue to be a huge factor and will require an intensified response. Bergero shared a U.S. Bureau of Labor Statistics graph showing waged agriculture will remain flat while self-employed agriculture continues to decrease. A large part of this trend can be attributed to U.S. agriculture’s dependence on an imported labor force. Charlton and her colleagues analyzed 30 years of data that points to this very conclusion and the need for a change. 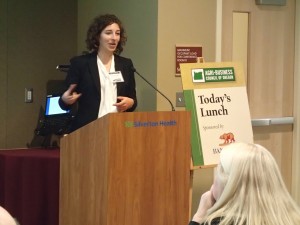 “In the 1950’s the farm labor force in the U.S. declined rapidly, and the measure they took in the 50s and 60s was to import (labor) from Mexico,” says Charlton.

Today, research shows that only two percent of California’s agricultural workforce comes from the U.S. This means the remaining 98 percent is made up of workers from a variety of other countries, predominately Mexico. A fact that presents an alarming situation. According to Charlton’s research, Mexico’s agricultural labor supply is in decline and several trends are responsible. The country itself is plagued by a falling birthrate, an increase in non-ag GDP, more secondary schools, and an increase in border control. With demand for farm labor in Mexico growing, Mexico finds itself in a transition stage, simultaneously exporting and importing farm labor. “Mexico is importing workers from Guatemala at the same time they are exporting workers to the U.S.,” Charlton says. Thus, the U.S. and Mexico are competing for a dwindling supply of available farm labor.

One solution would be to import agricultural workers from other countries not as far along in transition. Yet, Charlton points out that those other countries may reach transition and then we’d find ourselves with the same problem. She notes a few other viable solutions instead, changing cropping patterns, growing less labor-intensive crops, and adapting ag education. The ultimate solution will require a combination of all three.

Changing cropping patterns to grow less labor-intensive crops goes hand-in-hand with increasing the mechanization of agriculture. Both could help fill the void left by a declining agricultural labor supply. Another practice Charlton recommends to help ag do more with less is changing ag education, “looking at different skill sets that we can bring into this industry to help it grow.” Bergero’s presentation points to job sectors that are on the rise, and one of those is technology. Bringing skill sets from these kinds of industries into the mix could be a huge asset to agriculture and its prosperity in years to come. “If we can match those skills to the work, perhaps make them more technical, match them with technologies to make those workers more productive, that can really keep more people in the sector,” says Charlton. 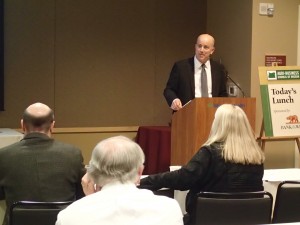 Curtis Robinhold, Deputy Executive Director for Port of Portland, discussed the importance of Oregon’s ports and the issues they face.

These recommendations could be what maintains international trade through West Coast ports, now facing issues and shortages of their own in the wake of recent labor strife. Most notably, the loss of Hanjin. “The loss of container service from Hanjin will reduce one of the lower cost avenues for Oregon agricultural producers to get their products to international markets,” says Robinhold.

For some Oregon producers, an increase in costs will become the new norm. “They will still be able to export and import, but by container it could require shipping through Seattle, Tacoma, San Francisco and Oakland, and that increases costs to farmers and producers,” Robinhold says. Methods that require less labor and add different skill sets, like those suggested by Charlton, could help make shipping through other ports more affordable. These are the kinds of tools we need to consider as we move forward.

Although challenges like these lie ahead, Oregon agriculture will continue to persevere as it has always done. Making adjustments is just part of the process. Strong dollar or weak dollar, Oregon’s importers and exporters have the tools to weather the storm and stay profitable. Adapting labor and adding new skill sets will be part of this, as will exploring new avenues so Oregon agriculture can continue to thrive. It all boils down to doing more with less, and Oregon agriculture is ready for the challenge.