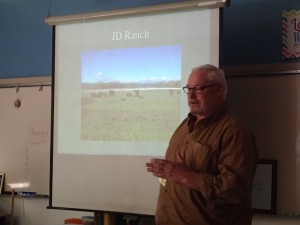 Jeff Kuhn talked about JD Ranch and what had been going on since the students visited on their field trip.

The Adopt a Farmer program has made a name for itself connecting middle school science students with where their food and fiber comes from. This is accomplished in a variety of ways that all stem from two connection points. Field trips to the farm and farm visits to the classroom. Together, these connections build the most important connection of all, the one between farmer or rancher and student. It’s a connection that begins on the field trip, blossoms in the classroom and extends from there. An experience that Jeff Kuhn, of JD Ranch, and his niece Stacey Kuhn have been proud to witness as participants this year.

Last fall Jeff and Stacey hosted 206 sixth grade students, from Diana Collins’ class at Robert Gray Middle School, to their 2,000 acre ranch on nearby Sauvie Island. Students were able to get the lay of the land, check out some of the equipment and see how JD Ranch produces a variety of crops. Among these were cattle, JD Ranch has a little over 100 head that are part of a cow/calf operation, and chipping potatoes used to create Tim’s Cascade and Kettle Brand potato chips. The group also included adults, helping the program’s message spread further. “On the field trip we had a bunch of adults, chaperones, and they were more blown away than the kids were,” says Jeff. Diana agrees, adding that “They were mesmerized by what the students were learning.” Fast forward to February and it was time for their first classroom visit. 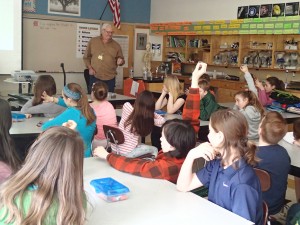 Students had lots of questions for Jeff and Stacey about the ranch, agriculture and what it takes to be a farmer.

Jeff and Stacey were met with recognition and enthusiasm, as students recalled the field trip and asked lots of questions about the ranch. “That was very rewarding for me, that they remember coming out to the farm and then recognized me and had questions for me,” says Jeff. Students remembered several things from their day there, the cattle, potatoes, potato chips, the shed where potatoes are stored, the sprayer and more. Potatoes were one of the things that made the biggest impression, especially for those who took one home. One student shared that he “took a potato home, named it Fred and ate it raw.” Another student was excited that she took one home and made French fries. Their awareness had grown, and this was even more evident in the questions they asked.

Simple questions, such as how many acres JD Ranch grows on, led to more critical questions like “if it’s a cow farm, why are there potatoes too” and “are potatoes GMO?” Students learned that it’s important to diversify, that there are few true GMO crops, and that methods like crossing and breeding are also used to create different kinds of things. Their questions also led to other kinds of links, like the one between farm and consumer. One of Stacey’s favorite moments was from a girl who just learned that JD Ranch’s potatoes are graded on color. Only a little green, caused by sunburn, or black, caused by bruising or a bug, is allowed. In fact, Tim’s Cascade only allows JD Ranch five percent green within a quarter million pounds of potatoes a day. Upon hearing this, the girl said that must be why there are green chips and some consumers may see those and think ‘I don’t want to buy from that company again.’ A response that impressed Stacey. “She made that connection and that was really neat,” Stacey says.

Next, Stacey linked back to the classroom and their recent studies of evolution. A soil science major in college, she was excited to share her knowledge of what soil is made of and how soil evolves. “I’m really passionate about it, I get really excited about it,” says Stacey. Students learned about the soil’s different components, gravel, sand, silt, clay and organic matter, and how to observe these layers in the soil around them. Gravel feels coarse, sand feels gritty, silt feels like flour, and clay feels sticky. They also learned one of Stacey’s favorite facts that a past professor of hers imparted, that one cubic inch of soil contains over a billion living things. “You’re stepping on that every day, think about that!” Stacey says.

As part of their discussion about soil, Stacey Kuhn helped students examine different soil samples and identify their components.

She also talked about the Missoula flood, comparing its size to the Seattle Space Needle, and its deposits of soil throughout Oregon and the Willamette Valley. Students learned that 200 feet of fertile top soil, from Montana, Washington and Idaho, was deposited in Oregon, with sand, silt and clay deposited from Portland to Eugene. The flood’s effects, the Washington state scablands and erratic rock deposits, impressed students. One boy asked how scientists knew one of the rocks was from Canada, and learned that its composition was different than the soil around it. This got him thinking about how other geographic features were formed, such as the Grand Canyon.

These are the types of connections that happen every day in an Adopt a Farmer classroom, and they’ll continue to happen in this one. Something Diana is excited about as they move forward. “I was really delighted with how much expertise Farmer Jeff and Stacey brought to our classroom, she says, “they totally went above and beyond my expectations.” Two more classroom visits will follow and perhaps another field trip. All of them, opportunities to grow Oregon’s future as one that’s more harmonious with agriculture. “I hope they have more of an open mind about Oregon agriculture in general. With all of these bills being proposed…I hope they think about how it will affect farmers, I hope they understand it more, and I hope they want to be a part of it,” says Stacey. In turn, she looks forward to learning more about her students and “what issues are important to them now, because they’ll be the ones driving the market.” Adds Diana, “I really hope that they are proud of where they come from and know that their local farmers work very hard and we need to support them and trust and believe in the work they do.”