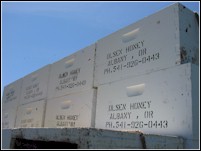 When Dirk Olsen was in high school he stumbled across a book on bees at the library called ABCXYZ of Bee Culture. After reading the book he became intrigued with the idea of beekeeping and decided to try it out for himself. “I’m kind of a weird guy,” he says. “Bees are weird.”

He traded a couple of the ferrets he was raising for a few beehives, and brought them to his parents’ home in South Salem. With a father who worked in insurance and a homemaker mother, Olsen had no experience in agriculture. “My mom thought I was crazy,” he says. What started out as a hobby grew into a great fascination, and within a year he had 25 hives on his parents’ 10 acres of land—which quickly grew to 50.

He soon learned he could rent the hives out to farmers for their crops for $5 a piece. In 1971 at age 17, he received his first business license from the state and Olsen Honey Farms was born. He began selling honey at a roadside stand in five-gallon buckets. By the time he started college at Oregon State University he kept between 200 to 300 hives, which paid for his college degree in business and entymology. After college he took the plunge and started building up his business.

Today Olsen Honey Farms operates out of Olsen’s home in Albany with six to 12 employees. They keep 7,000 bee hives that they rent to about 50 farms around Oregon, Washington and California.

A large amount of the honey produced by their hives is sold to packers. About 50 percent is sold overseas, but the local market includes Portland’s own Dave’s Killer Bread, who uses Olsen Honey in their products. Olsen Honey products are not available for direct purchase in stores, but every Saturday Olsen’s wife and kids sell honey at the Albany Farmer’s Market. Those who live in the Albany community ring the Olsens’ doorbell to purchase honey out of their home.

Olsen has been successful because he does what he enjoys and he sticks to what he can do well. “A lot of beekeepers I feel fail because they try to do it all,” says Olsen. “They try to make their own bee equipment, work on their own vehicles when they break down, they try to sell their own honey and put it in stores. What I know to do best is raise bees and make honey. That is where my skills lie. Most of our emphasis is into raising bees, providing them for farmers for pollination and making honey,” he says.

Olsen Honey Farms takes pride in the quality of their honey and their hives. Most honey sold in stores today is imported. Several years ago, as noted in a document by the Center for Infectious Disease Research & Policy, the FDA completed testing on honey from China and found an antibiotic called chloromphenicol, which was used to protect bees from disease. Chloromphenicol is illegal for use in food products in the United States, which has been linked to cause aplastic anemia, leukemia and other serious conditions. “The U.S. finally stopped it, but it’s coming back in again,” says Olsen. The honey is often shipped through other countries to evade inspections, or mixed with corn syrup or “Baker’s Blend” to make the product less than 50 percent honey, which isn’t subject to tariffs.

Olsen Honey is kosher certified and free of chemicals. Honey hives are placed in areas away from major agricultural areas where they might be exposed to outside chemicals or sprays. “The honey we produce is raw; we don’t heat or filter it,” says Olsen. By leaving the honey raw, it keeps its flavor, enzymes and vitamins.

“We are very rigorous on our beekeeping management and make sure the hives we provide for the growers who want bees from us are Oregon Grade A hives,” says Olsen. He stresses that it’s important for growers to know their beekeepers for their own benefit.

Other beekeepers may charge less for a hive, but are not necessarily up to grade for farmers; the number of bees in the hive may not be bountiful and the disease management lacking. “We really strive hard to give these farmers what they pay for,” says Olsen. Olsen and his beekeeping team take extra care in ensuring every hive rented out has a high bee count and proper disease management.

Disease control is a huge battle for beekeepers, and for Olsen Honey Farms, the biggest issue is the infamous Varroa mite. “When it first arrived we had chemical controls, but over time they become resistant to the chemical controls. Now even a small amount of mites can cause damages,” says Olsen.

Olsen Honey Farms controls this mite by monitoring mite levels on a regular basis, timely treatments, and creating new hives on a fairly constant basis. When creating new hives the queen reproduces faster than the mites can, and it takes up to a year before mite levels can reach high enough to wipe the hive out.

Even skunks, bears and possums are detrimental to Olsen Honey hives, as they eat the bees and can wipe out entire hives. Bee starvation has been another recent issue, as rain and colder temperatures the last few years has left the bees unable to leave the hive to make enough honey.

That pressure is what has kept him going in the industry. Dealing with the issues of beekeeping has kept him challenged—and engaged—in his work.  Olsen has found that to be successful in beekeeping he must keep up with the issues and changing technology. “The beekeeping industry is like a moving target. It never stops. If we kept bees the same way we did five years ago, we wouldn’t be in business. In five years if we keep bees the same way we do now, we won’t be in business,” says Olsen.

Olsen stays connected as a member of the American Honey Producers Association. As one of the largest beekeeping outfits in Oregon, his goal for Olsen Honey is to continue to get better at what they do, improving their efficiency and quality. “Beekeeping has allowed me to work with an amazing animal— the honeybee—on an intimate level for my life’s work; and to take that interest, mix in some learning and hard work and create a successful business,” says Olsen. With his passion for beekeeping, that success should continue on for years to come.