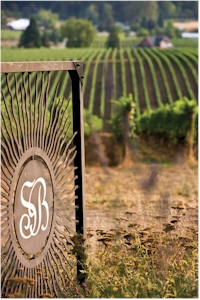 Twenty years to an “overnight success”

Alex Sokol-Blosser fondly remembers harvest season as an exciting time at the family winery as a kid. To help out his parents during this busy time he lent a hand after school by cleaning pumps, tanks, and hosing down the crush pad; summers he worked in the vineyard to earn money.

Interns from all over the world spent time at the winery, which allowed him to soak in a culturally diverse experience. One intern from France particularly made an impact on him. “He was so passionate about wine; he taught me how to taste wine—and enjoy life,” says Alex.

So when Alex and his sister Alison transitioned as Co-Presidents of Sokol Blosser winery three years ago—making the company a second generation family business—it only made sense.

Sokol Blosser Winery is among the oldest Oregon wineries, founded in 1971 by Susan and Bill Sokol Blosser. As first generation farmers, they had no idea the winery would grow to what it is today, or that their kids would want to continue to be a part of it.

“We were in our 20s, we were not thinking of being entrepreneurs; we were thinking about what we wanted to do at the time,” says Susan. “Years later when the word ‘entrepreneur’ was used widely I thought, hey, I’m one of those!”

Bill and Susan lived in North Carolina while Bill earned a master’s degree in planning, but they wanted to pursue their interest in starting a winery.

“I think we were part of the ‘back to land’ movement of the 1970s,” says Susan. “It wasn’t just about farming and it wasn’t just growing something, it was taking the idea of something we had grown and adding to the quality of life by transforming it into wine. It was the aesthetics that appealed to us,” she says.

With no farming or winemaking experience, the Sokol Blossers moved to Oregon and purchased their first piece of land in the Dundee Hills in 1970.

“I like to tell people they told us at Stanford that you can do anything with a liberal arts education, and I’m living proof of that because I had never grown anything before we started a vineyard,” says Susan.

The couple started out with fruit orchards, learning from neighbors who were farmers and getting to know their land. “One thing you know as a liberal arts grad is how to do research—so we did research,” says Susan.

In 1971 they planted their first Pinot Noir grapes.

“The first year we lost the vines because we couldn’t see them; we hadn’t gotten to the hoeing fast enough. Over the years we got to know our land and our grapes and became good at knowing what they needed, helping them do their best,” says Susan. “The goal is not the biggest crop you can get but the best crop you can get.”

In 1977, construction of the winery was completed, just in time for their first vintage. Bill and Susan ran the vineyard themselves, but hired a commercial winemaker from California to start making their wine.

At that time the Oregon wine industry wasn’t developed, and there were a lot of unknowns. Pinot Noir wasn’t yet a proven grape in Oregon, but they chose it because of the similar climate to that of Burgundy, France, where Pinot Noir grapes are used to make Burgundy wine.

But naturally, things weren’t easy at first.
“When we started there was no market for the wine,” says Alex.

“It was really a challenge because it became clear as soon as we had wine to sell that the world wasn’t quite ready for Oregon Pinot Noir. People didn’t know where Oregon was; we had to take out a map,” says Susan.

Their second challenge was getting people to taste Pinot Noir. “Restaurants would tell me that Pinot Noir was their favorite wine, but they couldn’t sell it because no one knew what it was,” says Susan. It took at least 20 years before the winery became regularly profitable, or as Susan likes to say, it took them 20 years to be an ‘overnight success.’

With persistence and hard work, their first major success—a 1983 vintage Pinot Noir—put them on the map. “It helped us solidify our image,” says Alex.

In 1985 the International Wine Center held a Pinot Noir blind tasting competition in New York. Judges were asked to distinguish between French-made wines and Oregon-made wines and interestingly, the tasters were not able to note a difference. The top five wines were Oregon wines, with Sokol Blosser Pinot Noir winning the top two places.

Before the competition Susan and Bill were contemplating whether to bother picking their Pinot Noir that season, since they had a three-year inventory. After the competition Sokol Blosser sold out their three-year inventory in a month or two. Alex says they developed a market for Oregon wine “city by city, handshake by handshake, person by person.”

But they did not develop the market alone. With so many wineries in Oregon and around the world, shelf space in stores is hard to come by. “The good news is there are enough Oregon wineries that we’re a critical mass and people recognize that,” says Susan. “Oregon has made a name for itself very much because the Oregon wine industry realized they had much more to gain by cooperating than competing. It’s unique in the wine industry and unique in business.”

Oregon winemakers also teamed up to produce the International Pinot Noir Celebration, which just celebrated its 25th year. Winemakers, wine-lovers, restauranteurs and retailers came together to create a weekend event of wine tasting, dining and celebration. Each year about 65 featured wineries and 50 guest chefs attend this event, sharing their Pinots and local cuisine with 700 guests.

“It’s now a worldwide phenomenon,” says Susan, who served on the Board of Directors the first year of the celebration.

Now in their 40th year of business, Sokol Blosser wine is sold all over the world, with their biggest international markets in Canada, Japan, the United Kingdom, Sweden and the Caribbean. Domestically, Oregon and Texas are their largest markets, and Safeway and Fred Meyer are their largest buyers.

Sokol Blosser’s goal is to continue to grow that market, exporting all over the world to achieve their vision to be a world-renowned producer of fabulous, sought-after wines.

Sokol Blosser is proud to be the first winery certified “Salmon-Safe” when the program started in 1996, the first winery in the world to receive the U.S Green Building Council’s prestigious LEED certification in 2002, and one of very few vineyard-winery operations in Oregon to have achieved full USDA organic certification. In 2007, Sunset Magazine awarded Sokol Blosser their “Green Winery of the Year.” Susan says this recognition has been achieved by operating by the “Triple Bottom Line: People. Planet. Profit.”

“It’s not just about making money but about how you do it. One of our goals is sustainability across the organization, and we have spent a lot of time thinking about that. I’d never say we are sustainable, it’s always a work in progress. We feel very tied to our sense of place,” says Susan.

“It’s important to us because it’s part of who we are,” says Alex. With Alex and Alison now Co-Presidents of Sokol Blosser (Susan has retired and holds the title “Founder” of Sokol Blosser), they will continue to run the business with the same values—being good to the earth, a passion for Pinot Noir, and continuing the legacy their parents built up for 40 years—one day, maybe their kids will too.

Olsen Honey Farms
Following the Sheep in the Morning