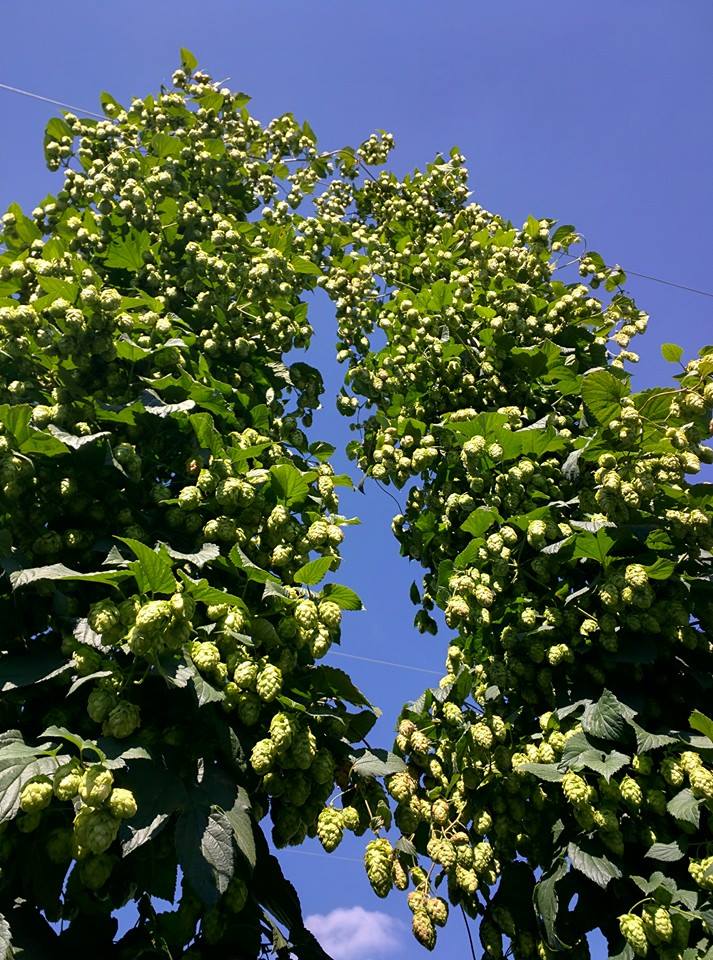 Hop farming has a rich history in Oregon. In 1932 Oregon led the world in hop production with more than 34,000 acres in production. Many Oregon hop farms have been in production for three, four or even five generations. Oregon is currently the second largest hop producing state in the United States with more than 6,000 acres in production in 2015 and a farm gate value of $34 million. The growing region in Oregon is located in the Willamette Valley on the 45th parallel where the valley’s fertile soil, moderate climate, and plentiful rainfall provide ideal conditions for high quality hop production. Oregon’s farmers have success growing many varieties of aroma and alpha type hops.

The pleasing flavors in beer are accredited to the plant’s flower, also known as the hop cone. The cone looks similar to a pinecone, but is smaller and has soft overlaying petals. Remarkably, in addition to providing beer with a bitter flavor and distinctive aroma, the hop cone also contributes to the clarity and foam stability of your pint.

The hop season begins in mid-March when the dormant hop plants begin to emerge from the soil. The first step is mechanical crowning, which removes the top portion of the hop crown when shoots start to grow. This procedure helps prevent downy mildew that has overwintered in the crown.  Hops grow on trellis, a system of crisscrossing cables and wires supported by wooden poles that are 15 to 20 feet tall. Strings are attached to the top of the trellis and then anchored into the hop crown. New shoots that have emerged since crowning are then ready for their climb to the top of the trellis. Hops naturally climb as they grow, but to maximize yield, growers use a technique called training. Farm hands pick three or four of the best looking bines from each crown and wrap them around the strings in a clockwise direction. Once they hit the top of the wire, side arms start to develop that will then produce the hop crop.

Harvest begins in August and lasts until early October. Each variety reaches maturity at a different time. During harvest, hop bines are cut in the field and taken to the mechanical picking machine by trailer.  They are then hung upside down and fed into the picking machine which strips the bines, screens out unwanted leaves and stems, and provides clean hops to be spread onto drying floors of the kiln. The drying process is a craft that must be done properly for retention of essential hop oils and aromas, as overheating and drying may affect the natural hop character. The dried hops then travel by conveyor belt to the cooling room where they are cooled and eventually pressed into 200 pound bales. Each bale is labeled with crop year, variety, grower number, and lot number before being inspected by the Oregon Department of Agriculture. Each hop lot is given a certificate indicating the percent of seed, leaf and stem. Modern storage and processing facilities ensure hop quality is maintained, while supplying the brewing industry with the products they desire.