Subscribe to our RSS feed
Posted by
Cersovski Farms

Cersovski Farms – We are Oregon Agriculture 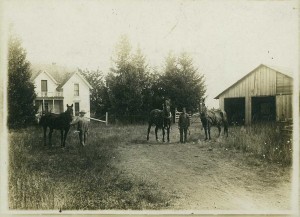 Joseph Cersovski and his brother, sometime after their arrival in Oregon in the early 1900s.

We are Oregon agriculture.

Ever since our family arrived in America in 1880, we have farmed. After stops in Nebraska and Kansas, our great grandfather, Joseph Cersovski and his brother arrived in Oregon in 1902. Originally, the brothers farmed in the Fern Ridge area. In March of 1913 however, our great grandfather purchased a farm in Harrisburg, Oregon; a farm that 100 years later is still wholly operational and was given Century Farm status by the state of Oregon in 2013. 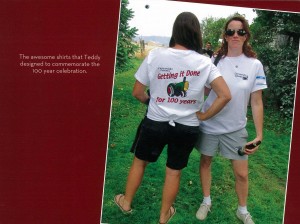 When our grandpa, Ernest, and his brother, Leo, graduated high school in 1932, they began farming this land with five work horses and a Model T Fordson. During this time, the two began building a herd of registered Guernsey dairy cows. By the late 1930s, they had a commercial dairy production under the name of Linnacres Dairy. With America’s entry into WWII, our great uncle Leo enlisted in the Army Air Corp. Working alone, our grandpa milked 50 head of cows and ran not only the home place, but several acres of rented land as well. In the 1950s the brothers decided to sell off the dairy herd. Then, in 1958, Ernest and Leo went their separate ways professionally. Ernest bought Leo’s interest of the home place and continued to feed cattle and hogs and maintain a flock of laying hens. Leo purchased his own farm. 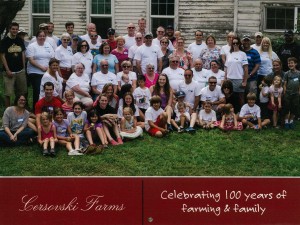 In spring of 1974, the daily operation of the farm grew to include the third generation when Ernest’s eldest son, Joe, returned from the Air Force. He and his younger brother, Don, joined their Uncle Leo in the farming operation. Later, a third brother, John, joined the farm business. Today Joe’s oldest son, a member of the fourth generation, is stepping in too.

The physical and practical landscape of agriculture is forever changing and adapting to the demands and technology of the present day. Over the last 100 years, production on our farm has included silage corn, sugar beets, radishes, parsley, wheat, grass seed, meadowfoam and peppermint. While agriculture is a changing entity, it retains its roots in family histories and traditions. 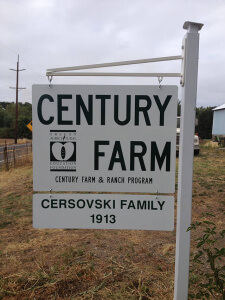 The family farm is truly something to be celebrated and cherished. We are honored to have contributed to Oregon’s agricultural history for the past century. We remain, and will remain, committed to being good stewards of this land that has been entrusted to us. We are Oregonians. We are farmers. We are Oregon agriculture.