A future, where urban and rural share a mutual understanding of what Oregon produces and why it’s important. It’s a vision shared by many who wish to bridge the gap between urban and rural, a gap that resembles a Venn diagram. Although each has its place, urban and rural intersect in many ways, one being where well-traveled areas meet farms. These are places where opportunities for education abound, yet most don’t realize what they’re looking at. The Agri-Business Council of Oregon (ABC), Oregon Women for Agriculture (OWA) and Crop Production Services (CPS) have joined together to tackle this by spreading the Road Crop Sign program further. 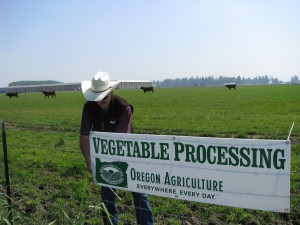 The Road Crop Sign program began in the 1970s with OWA’s Pat Coon Roberts creating wooden road crop signs in her garage. Oregon Women for Agriculture placed the signs on their own farms and soon others wanted signs for their farms too. When the program became too big for the volunteer organization it was turned over to ABC, and signs have been available for purchase ever since. A recent decline in signs prompted a renewed effort this spring, with OWA distributing signs around Linn and Benton counties and ABC focusing on Interstate 5 between Portland and Salem. The renewed effort is especially important, as Oregonians have continued to become increasingly more urbanized.

“Most Oregonians are now three generations removed from the farm. Few truly understand what it takes to provide their food and fiber, and even fewer realize how lucky we are to live in a region with such fertile soils and a climate that allows for such a wide diversity of products,” says Horning.

Over three dozen of Oregon’s more than 225 commodities can be found in the Willamette Valley along the I-5 corridor, a key factor in ABC’s decision to focus on sign placement there. Combined, ABC and OWA have placed nearly 200 signs over the past year. “There are so many well-traveled roads that pass agricultural land,” says Horning. Our initial focus is the I-5 corridor, but we intend on identifying other well-targeted roadways.” 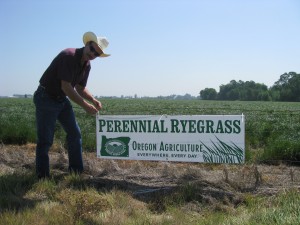 Expansion of the program has become a focus of the Oregon Women for Ag. Bi-Mart and Bi-Mart Willamette Country Music Festival stepped up to provide $3,000 towards purchasing signs, which OWA is placing along I-5 and Highway 228 leading to the 2013 Bi-Mart Willamette Country Music Festival in Brownsville. Spurred in part by their April auction, in which their fund-a-need component raised $6,050 for signs, OWA has also posted signs in Linn, Benton, Polk and Marion counties, Central Oregon and in Klamath Falls. Crops their signs have identified include cherries, meadowfoam, radish seed, Chinese cabbage, several varieties of grass seed, winter wheat, spring wheat, hay silage and corn silage. On the last two, OWA’s Dona Coon notes that “Some people will have to Google silage, but if we get them thinking that would be awesome.”

Getting people thinking about Oregon agriculture also has relevance for Crop Production Services, whose team has been helping ABC and OWA put up signs. “It creates a heightened awareness of what kind of crops are being grown in Oregon,” says Crop Production Services’ Steve Gapp, “it shows how proud we are that Oregon produces this tremendous variety of crops, and it’s a point of pride for Oregon.” The project has been a natural fit for Gapp, and not just because he sits on the ABC Board of Directors, it’s a source of pride for his field staff. Crop Production Services distributes fertilizer and agricultural chemicals, does crop consulting and is right there helping manage crop inputs, so they get to be “old friends” with growers. Gapp has noticed “a neat, untapped source of pride well up” from field workers who’ve been placing signs, as they feel more connected to the farms they work with, the industry and Oregon agriculture.

“You place a sign, stand back to look at it, and you go, hey we placed that, our team put that out,” says Gapp of the experience. 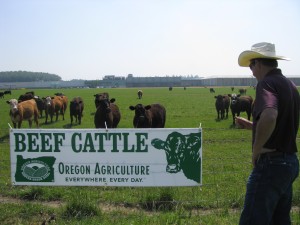 Oregon beef cattle came by to see what all the fuss was about as their road crop sign was tied to a fence along I-5.

It’s a connection that’s been strengthened by feedback coming from a variety of sources. Grower enthusiasm has been one of them, but others have chimed in as well. “When I was putting up a sign on Wallace Road, someone beeped their horn going by, I take that as a sign of support,” says Gapp. Even non-native Oregonians share a connection to the signs. Coon recounts that, while on a ferry going between islands in Nova Scotia, Pat Coon Roberts encountered a lady from Nova Scotia who mentioned she just loves seeing the road crop signs when she’s in Oregon.

The signs speak to a variety of people and crops, but they also hold a larger purpose. “It makes them (the public) aware of what’s growing and by repetition of seeing it, it sinks in,” says Coon. “When they see a road crop sign for grass seed it’s going to sink in that it’s not just grass, it has a purpose.” Revealing this purpose and connecting the urban populace to agriculture is the common thread that unites the Agri-Business Council of Oregon, Oregon Women for Agriculture and Crop Production Services in this effort. “We look forward to continuing to share that story of agriculture and our common bond,” says Coon. In sharing their stories, the distance between urban and rural will likely grow closer. It’s exciting for everyone involved, and the hope is that it will lead to a better future.