For Jesse Rue, farming has always been a family tradition. Growing up in a family where his dad, grandpa and great-grandpa farmed, agriculture is – and always has been – a way of life and a way to take care of the land. “In a lot of ways, you could say it’s in my blood,” says Rue. His great grandfather, Knute Rue moved to Oregon in 1910 and specialized in logan berries, hops, hogs and cattle. Then Jesse’s grandfather, Waldo Rue, farmed after serving in WWII raising livestock, grain and grass seed. When he retired, Jesse’s dad Joel Rue took over farming in 1976 raising peas, oats, wheat, sugar beats and brassicas but predominately grass seed. 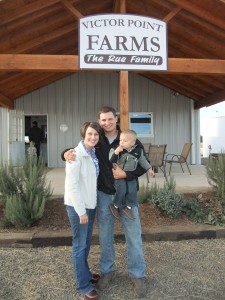 Jesse and Leah Rue with their son Jackson. Family is an important part of Victor Point Farms.

Today, family’s still at the heart of Victor Point Farms, where Jesse farms with his dad and hired hand Dustin Heibert. Jesse’s two younger brothers also work on and off at the farm, and they are always welcomed back with open arms. You could say that family is part of the secret to their success. The other part is their dedication to taking care of the land.

The farm specializes in growing grass seed, a crop that has put Oregon on the map. Oregon’s temperate climate makes for exceptional growing conditions, which consistently yields a thriving grass seed crop. “Oregon grass seed is known for its quality. With our climate we can grow good grass,” says Rue. For the Rue family, the choice to grow grass seed has always been about environmental factors and what’s best for the land. Grass seed is a sustainable crop that gives back because it’s always producing oxygen. As for the land, Victor Point’s rocky soil poses challenges that grass seed answers by stabilizing the ground and producing less erosion. Taking care of the land is a main concern for Victor Point Farms, one that also extends to future generations. 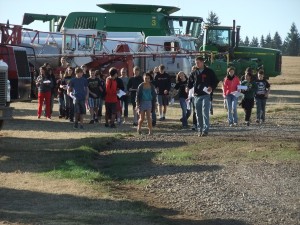 Mark Twain 8th graders get an up close look at the farm and its equipment with Jesse Rue.

The farm has recently gotten involved with ABC’s Adopt A Farmer program this year. Adopt A Farmer pairs middle school science classes with a farmer for one year so they can see where their food and fiber come from and the impact farmers have. “The biggest value is getting the kids in on the industry around them, and making them aware of the care for the land and what we do,” says Rue. During a fall field trip, Daniel Jasma’s Mark Twain 8th grade class got an up close look at business on the farm. Classroom visits each quarter, and another field trip in the spring will round out the experience. An experience that’s especially important to Jesse Rue. “It’s great to interact with hometown students, it gives me a tie,” says Rue.

The hope is that students take away a general understanding of the work that’s involved, how it affects the land and environment and what’s going on around them. “If they are driving with their parents and can look at a field, see what’s there, and know what’s going on and how they can use that product? That’s key,” says Rue.

Urban Oregonians are often not aware that Oregon grass seed plays such a pivotal role in their lives. Grass seed from Victor Point Farms is sold to private seed companies such as Scotts, Pennington and John Deere Landscapes. The finished products end up at stores like Lowe’s and Home Depot where they’re available for public purchase. After purchase, grass seed is used to create and maintain lawns, golf courses and other athletic fields. Grass seed farming makes a big impact on people and the environment, and Victor Point Farms is making sure future generations are well aware of this. 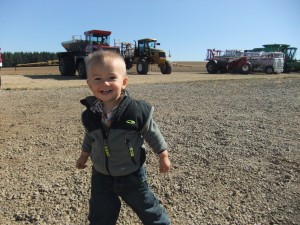 Jackson Rue (pictured) and Addison Rue (not pictured) are the next generation of Victor Point Farms.

“I hope that we at Victor Point Farms can continue to be good stewards of the land so that we can preserve the beauty of the land that we have had the privilege to manage,” says Rue. “I also hope that we can continue to do outreach opportunities like Adopt a Farmer and other programs to continue educating the public on what we do.” Preservation and education involve all future generations, including their own.

Jesse Rue’s two children, Addison, 4 and Jackson, 2, have already taken an interest in farm life at a very young age. “Addison, my daughter, likes to help me stack firewood in our wood shed. Jackson likes to hand me tools in the shop if he is ever in there with me while I am working on something,” says Rue. Just like their dad at a young age, Addison and Jackson already share his enthusiasm for farm equipment. “Anytime a four-wheeler or gator is fired up you can bet you will see them run out the back door in high hopes I will take them with me,” says Rue.