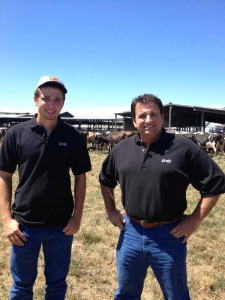 Imagine moving from California to Oregon to buy a dairy you had only visited once, and on top of that, imagine you didn’t know anyone in Oregon. For two Oregon dairy farmers, Jerome and Carole Rosa, their story began with that type of adventure. Starting a dairy had always been in the plans for Jerome, and when Carole came along, it became an adventure the two of them embarked on together. After graduation from Fresno State, and being married for five years, they started looking in California to find the perfect location. Yet, no matter which way they penciled it out and did the numbers, the location they wanted just wasn’t going to work. At this time in California you had to have a quota to get a higher price for milk, but Oregon had just done away with its quota. The Rosas had heard of a dairy in Oregon that was for sale at the same price as the one in California, and after one visit it became clear that their decision was a no-brainer. The two purchased the dairy and moved to Oregon.

“We were both 28 and had a one-year-old daughter (Genae) when we moved, we didn’t remember where the farm was and didn’t know a soul in the state, it was quite an experience,” says Jerome.

The farm came with 60 head of cattle and when Jerome and Carole arrived there was a high somatic cell count and low vacuum levels in the milking equipment, causing stat mastitis. This meant that milk quality was poor and couldn’t be packed by the state. In fact, the conditions were so bad that their real estate agent asked them if they were sure they still wanted to buy it. Jerome and Carole were unfazed and took on the challenge. “By using intense management techniques we were able to get the problem under control,” says Carole. Successfully managing this issue gave them time to focus on building their dairy and a family. First came another girl, Erika, followed by a boy, Greg, within the span of two years. With changes to their family came changes to their dairy, and the need to change from conventional methods to organic ones. 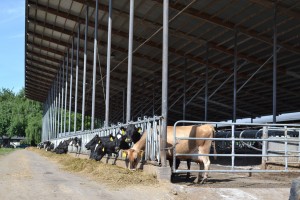 When Greg was in preschool, he developed a severe case of contact dermatitis, from playing in the cottonseed the Rosas had purchased from South Africa to grow. Due to harsh fumigants used on the shipping container, there was a high concentration of chemicals on the cottonseed. Not only did Greg get seriously ill, but so did their cows. The Rosas told their local grain company not to send them anymore foreign cottonseed, and the situation made Carole rethink what they were doing. Meanwhile Jerome was in search of a stable market for their milk. Converting their dairy to organic became the solution to both problems. “At that point we began shipping to Organic Valley and redirected our farm at that time,” says Carole. The Rosas sold their conventional herd and bought an organic herd of dairy cattle, and their next chapter began.

For the Rosas it became more than just going organic, they also added several renewable practices to the dairy that have allowed them to conserve and reuse a lot of their resources. In particular, their use of air and recycled water are a couple of examples. A few years ago, to bring good airflow and natural light to the area, the milking parlor’s roof was raised and skylights were installed. During winter, hot air from the vacuum pump is blown into the milking parlor, and when it’s shut off in the summer it goes into the clothes dryer to dry towels used for wiping the cows’ udders. Freon gas cools the milk tank, then the warm gas preheats water that goes into the hot water heater. Water circulating through the plate cooler, cools the milk down from 101 degrees to 68 degrees. The warm water then gets recycled and is used to wash the barn, wash out free stall barns and irrigate the fields. “We’re very, very energy-conscious all the time on things that we do,” says Jerome. All of these practices have had a hand in producing healthy, wholesome milk. 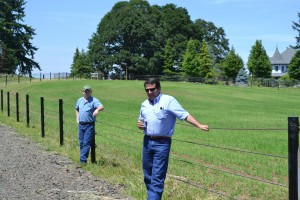 Today Jer-Osa Organic Dairy prides itself on having extremely clean, high quality milk. Intense management along with automatic equipment has been part of that equation. One of its most vital features is the automatic take-off function. When the milking equipment is ready to come off, it receives a signal from the computer and automatically detaches. As each cow is let out, an automatic back flush system leaves the equipment clean and ready for the next cow. “That’s one of the reasons we have such clean milk,” says Jerome, “When each one of those cows leaves, that machine is automatically rinsed, sanitized and vacuum-dried.” One mark of that quality is a Gold Award for clean milkfrom the National Mastitis Council. 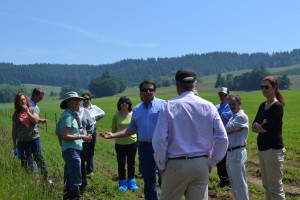 It hangs on a wall in Jerome’s office, among several awards Jer-Osa Organic Dairy has won. “Over the 25 years we’ve probably received an award 99% of the years we’ve been in business,” says Carole. For Jerome, Carole, and Greg, who now works with them, there’s a lot to be proud of and a lot to celebrate. These awards mark how far they’ve come in many ways, with Jer-Osa Organic Dairy celebrating its 25th anniversary on November 16, 2013. Naturally, the awards are hardly the most rewarding part for the Rosas. “As far as rewarding, I think that it just feels good to be able to produce a wholesome, nutritious product that a majority of the people, children and adults alike, need to balance their diets,” says Carole, “It feels good to know we’re doing something beneficial for others.” It’s the mark of an amazing adventure, and it’s one they hope to continue for many years to come.