In just four years, the Adopt a Farmer program has seen its numbers quickly grow and expand. Three farmer/teacher pairs the first year, nine pairs the second year, 18 pairs the third year and 37 pairs in its current year. These numbers are just part of the equation. There are many components to Adopt a Farmer’s success, the most important one being the connection between farmer, or rancher, and student. This connection unites math and science lessons with real-world ag applications, and an awareness of where their food and fiber comes from. Both are key reasons why Joe Fitts of Wigrich Farms and Mara Burke of Calapooia Middle School became participants this year.

For Fitts it’s about “being able to share farming with people who may not even know they have an interest in farming.” He looks forward to seeing the genuine curiosity that comes when kids or parents get interested and he’s the one who got them interested in it. A great match for Burke, who was excited for the opportunity to bring her kids into a new environment. “It’s really important to get my students outside, especially into environments where they can see how science relates to the real world,” says Burke. From the moment Burke first visited the farm last summer, it was easy to see these connections and how they’d make a good match.

The two began planning a field trip that would highlight the farm and connect it with the current class curriculum. Burke’s students were going to participate in a national contest called “ExploraVision,” where they would pick a piece of technology and predict what it would look like in the future and how they could improve it. This became the lens through which all of the farm’s field trip stations would be viewed. Oregon curriculum requirements also include an engineering design project, so it was decided that all of the farm’s field trip stations would feature some type of farm machinery as a tie-in. A few months later, on a bright and warm early October day, Burke and her 31 eighth graders arrived at Wigrich Farms for an exciting field trip.

For the first station, students joined Fitts at the edge of the farm’s 120-acre hazelnut orchard. Each student received a bag of raw hazelnuts to snack on while he shared the farm’s history and some interesting hazelnut facts. Many questions followed, and from those came a discussion about hazelnut paste, what hazelnuts are made into, how they’re formed, how they’re harvested and more. “There were a lot of ‘What’s that?’ questions, and then from that there were a lot of follow-up questions and it was great to see them connect the dots,” says Fitts. Then the students were treated to a look at the harvest in action. The sweeper had swept several straight rows of debris mixed with hazelnuts, so the real draw was seeing the harvester sort out the hazelnuts from the debris. Students were most impressed by the amount of hazelnuts Wigrich Farms harvests per acre per year, approximately two tons or about 4,000 pounds. 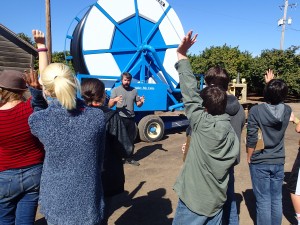 After that it was on to a second station for a look at an irrigation machine with Leo Yakis of Valley Fab Corp. Yakis explained the different features of the irrigation machine, from its 1,500 foot hose to the pressure pump that allows it to shoot water 200 feet in each direction. For the students, the most impressive part was hearing about the technological advances that had been made.

“Some of their questions showed a lot of insight. I think at Leo’s station they were immediately able to draw the connection, what it takes to irrigate and how current technology makes it easier for a farmer,” says Fitts.

Students learned that an irrigation machine’s computer is equipped with a cell phone that can text a farmer its status, can text them when it comes in for the day or can text them if it has a problem. The fact that the irrigation machine could also be started and stopped via cell phone was something students found fascinating. This led into a third station, completing the day with a look at some of the farm’s machinery, including a tractor that has the capability to drive itself and is equipped with newer GPS technology. 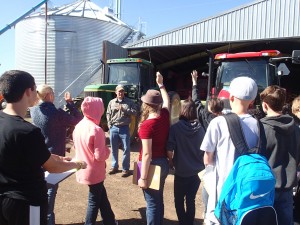 Students learn more about technology and farm equipment with Joe Fitts of Wigrich Farms on their Adopt a Farmer field trip.

Out of all the moments from the field trip, it’s easy for Fitts to pick his favorite. “I get a lot of satisfaction from sharing with them and seeing that interest reciprocated,” says Fitts. Lunch time conversations provided the perfect opportunity, focusing on farm technology and leading into what we might see in the future. Students thought that hazelnut trees would be genetically manipulated to produce bigger or smaller hazelnuts. They also predicted that irrigation machines would be bigger, wouldn’t have to move or would move themselves, and would know what crops needed water. All were concepts these students took back into the classroom. “This first field trip inspired students working on ExploraVision, it was some real good bonding for them, both on the field trip and after,” says Burke.

Connections like these are just the beginning, as the rest of the school year includes classroom visits from Fitts and perhaps another field trip to Wigrich Farms. Each interaction with students will help build the next generation’s experience with agriculture, something that isn’t lost on Fitts. “I hope that they’re a lot more informed about Oregon agriculture. Whether or not they join the industry, they’ll be community leaders and voters and to some extent they will shape the environment my kids are working in,” says Fitts. Burke shares his hope, and each of them are excited for what comes next in their Adopt a Farmer partnership. “It’s something that I look forward to. It’s not like one more job, it’s fun for me,” says Fitts of the experience. Adds Burke, ““I really appreciate the opportunity and look forward to planning the next steps.”