Butler Creek Farm is required to hold an annual corporate meeting, but you won’t find executives wearing suits. What you will see is a cabin full of family members gathered together in a living room, a few sitting on the floor and some lounging on furniture—a hot pot of coffee and a teakettle warming on the stove. Decisions are made gladiator-style with either a thumbs up or a thumbs down. The meeting is officially facilitated and important decisions are made at this annual meeting the family has affectionately named ‘Cousin Fest.’ Every year in July, nine cousins who spent their childhood summers on the farm together travel from all over Oregon and California to reunite at Butler Creek Farm for a weekend. They set up tents in the orchard or pop-up campers in the woods, bringing their children along with hopes that they will all get to know each other and grow to love the farm as they did.

The calving barn, where moms and babies stay for rest and bonding.

Butler Creek Farm was homesteaded by a man named MM. Melvin and his descendants in the late 1880s. His daughter Eleanor Melvin Seymour and her husband Louis Seymour ran the farm for many decades, raising livestock, selling eggs to the locals and cream to the local cheese factory while living off the land until their death.

Today the 800-acre farm of forest, bench and floodplain is inhabited by primarily Red Angus and Simmental-mixed cows, and is operated by the extended family of the late Seymours through the fifth generation. Joan Seidel, granddaughter of the Seymours and treasurer of Butler Creek Farm is the fourth generation to carry on the farm, along with her two sisters. The sisters have a total of 11 children combined, who now make up the cousins of ‘Cousin Fest.’ “We brought the kids to the farm so they could value the farm and the freedom of being there, and learn to work together,” says Seidel.

The farm has a maximum of two employees at any time during the year, including the farm manager who has devoted himself to Butler Creek Farm since 1989.

It wasn’t until 2002 that the family decided to sell their grass-fed beef directly to customers, raising about 35 angus cows. They serve customers in Portland, Coos Bay, Cottage Grove, Bend and Florence. The cattle graze on the farm’s grasses, and in the winter, they are fed clover and grass hay grown and harvested onsite. In the fall, the butcher travels from Eugene to slaughter the cows on the farm, which avoids the stress of travel. Customers can purchase one quarter, one half, or a whole custom-cut cow. Butler Creek Farm sells grass-fed beef to about 50 local customers every fall and hopes to expand their market. “The land sustains very healthy animals,” says Seidel.

Little has changed at Butler Creek Farm, a point of pride for the family. One important goal of Butler Creek Farm is preservation of the environment. “The floodplain is one of the few untouched wetlands on the Oregon Coast,” says Seidel, “It’s very important to preserve that.” Seidel grew up in Portland but spent her summers on the farm and learned to love it. Even when she moved away to Europe, she still made it a point to come back to the farm in the summers. “The land is beautiful, and it’s important to us to preserve it as much as possible,” she says, “It’s just a tiny piece of nature that we don’t want ruined.”

Because the land is relatively undisturbed, it has been a place for research and learning. Butler Creek Farms has partnered with several organizations to preserve and enhance the natural environment of the farm, including the Coast Range Association, Douglas County Soil and Water Conservation District, Oregon Department of Fish and Wildlife, Oregon State University and Portland State University.

“I feel that these aspects are an important part of how our farm serves the greater society and confirms the value of doing the work that we do to maintain it,” says Seidel. 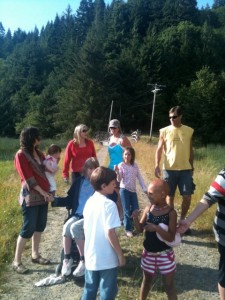 A few of the fifth generation cousins taking a walk on the farm with their children during Cousin Fest.

The family has worked with local school kids to plant trees along the stream as well as placing rootwads from fallen trees in the creek to give fish protection. Streams are bridged instead of diked and filled, and the wetlands are monitored for invasive species, eradicated when necessary.

“The natural drainage of the wetlands continues,” says Seidel, “The beavers still come around, the deer still roam everywhere.” Seidel points out that the only thing they have done to the land is to put up a fence around it. “We can use the land without hurting it. Its been grazed since the 19th century and nothing is harmed, nothing is changed,” says Seidel, “I’m delighted that each generation feels the same about preservation.”

The business doesn’t turn a profit, but profit was never the family’s motivation to sustain the farm. “It’s the most gorgeous place in Oregon, we don’t want it taken over by developers,” says Seidel, “We have deer, we have bobcats, we have beaver we have elk.” Even though every member of the family has their own career—each one of them has a hand in the business—from direct, hands on work—making hay, building fences, cattle management, invasive weed management and infrastructure maintenance, to beef sales, bookkeeping and keeping minutes at meetings. Five generations have enjoyed the farm, and the family hopes that the sixth generation—still in their youth and making their own memories on the farm—will maintain the farm and one day have their own “Cousin Fest.” “It just means a lot to our family. It’s the one thing that ties us all together,” says Seidel.