As a kid on the farm, Kirk Lloyd broke all the rules. He drove loud D7 Caterpillars without earplugs, worked without eye protection and once slid a combine out of a field backwards, stretching a fence out over a cliff. “I just never thought anything bad would happen to me, which is typical of young people—and typical of farm people,” says Lloyd. 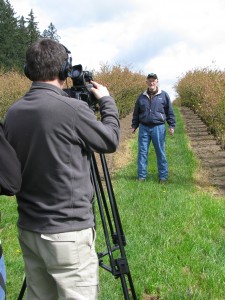 Today, with hearing not quite as sharp, he makes his living convincing others not to do those things. Lloyd is president of Risk Management Resources, Inc., an agriculture safety consulting firm he started in 1996. “In a lot of ways I feel like I was meant to be in this position, but I never planned it,” says Lloyd.

Lloyd grew up on a dry land grain farm near Lewiston, Idaho. He remembers harvest time with fond memories as it was something his family did together. After earning his degree from the University of Idaho in agricultural economics, he went to work for Farm Credit Services. He had worked there nearly 10 years when he got a call from an old friend who was a manager at Agri-Comp, a former insurance agency. “I hadn’t talked to him in years and he called me up out of the blue and said he needed a farm kid,” says Lloyd.

Agri-Comp hired him in 1988 to help develop a safety program targeted at the agriculture industry. At the time industrial safety guidelines that didn’t apply well to agriculture were pushed at farmers, so the guidelines weren’t valued or taken seriously. Lloyd spent a lot of time conducting research, visiting farms and talking to growers to find out what did or didn’t work for them in order to develop training programs. “It was hard. It took a long time to figure out what it was we needed to do,” says Lloyd, “It took a couple of years to build traction.”

In the mid-90s Agri-Comp was sold to another company. Lloyd didn’t agree with the company’s business practices and decided to leave. “I figured I’d have to get a real job at that point and people said, ‘No! We’ll pay you to do it,’ and I became an accidental consultant,” says Lloyd, “The farm community really stepped up and supported my work, and SAIF did also.” 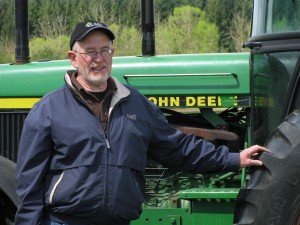 Every day on the job is a new challenge for Lloyd, never knowing what each day will bring. “Sometimes I end up dealing with really horrible injuries,” says Lloyd, “I’ve literally had people call me and burst into tears.” When an accident happens, Lloyd steps in to help the farm deal with the situation appropriately. “The farmer is so upset they can’t deal with someone who wants to put them under the microscope to figure out what went wrong,” he says. Farms rely on Lloyd to notify OSHA of the incident, preserve the scene of the accident and take necessary action to make sure no one else gets hurt. “I have the ability to shut off my emotions and do what I need to do,” says Lloyd, “But it’s not the way I want to spend my time.”

Lloyd stresses that all farmers and ranchers need a safety program—before a disaster occurs. When he first started working in farm safety, he attended a conference in California. He listened to safety professionals argue about the key to safety. One group argued that safety is all about technology, design and engineering controls of equipment. Another group argued that safety is all dependent on human behavior, and that people have to be motivated to practice safety. “I would sit there and look at this fight and think, why does it have to be one or the other?” says Lloyd.

He believes that both aspects together are equally important to safety, and that leaders in agriculture businesses need to learn how to set expectations for their employees working on the farm. “With safety, that means you tell people, ‘I don’t want you to get hurt, I want you to get home to your kids.’ We need to say that,” says Lloyd, “If you catch somebody using proper safety, you need to recognize them for it and say, ‘I’m glad you’re doing that.’

Lloyd reading over the script he helped write for the tractor safety video filmed in 2011. He attends classes and trainings regularly to keep his safety training knowledge current.

Gingerich Farms has been a client of Lloyd’s since he first started out as a farm safety consultant. Lloyd trained Gingerich Farms on how to practice safety independently. “It’s a joy to work with Kirk. He does everything he can to help you, he’s willing to work things out to where it makes sense for everyone,” says Gingerich Farms CEO Verne Gingerich, “He’s definitely brought our awareness to a higher level over the years.” Lloyd also helped Gingerich Farms make improvements to their forklift training classes for employees. “I’ve learned everything I know about safety from Kirk,” says Tim Farnsworth, production manager of Gingerich Farms.

Lloyd is co-founder of FarmSafe, a non-profit organization where members are advised of proposed OSHA rulemaking activity before the rules are implemented and informed of how to stay connected to this process. The organization encourages safety regulations that help keep farms safe while keeping in mind what does or doesn’t work for farmers. Earlier this year OSHA made proposals that would redefine ‘agriculture,’ changing the definition of what agriculture does, and what classifies a farm-related business or project. “It didn’t sound like a big thing, but what they were defining, it would be tougher for places to meet law requirements,” says Farnsworth, “We felt it would make it harder for farms to meet the requirements of the law.” But FarmSafe made sure they had a voice.

“We were one of several programs who opposed it and they backed away,” says Lloyd, “Farmers don’t believe they can change what OSHA is going to do. I have been amazed at how willing they are to listen to other ideas and to compromise.”

Lloyd has more than 20 years of experience in the safety and compliance industry for agriculture, and he hopes to someday find someone to carry on what he has built. “I want to move this forward,” says Lloyd, “I can’t do this all myself. I want to find the right person and I haven’t found the right person yet. It has to be someone both good at safety and good at agriculture.”

Until that day, Lloyd will continue to do the work he is so passionate about. “I love the people in agriculture. They’re great people,” he says, “They do important service to all the rest of us, keeping us fed and clothed, and I don’t think the work they do is appreciated all that much. I like to be able to serve that community.”