On July 22, 2009, farm safety expert Kirk Lloyd of Risk Management Resources received a tragic phone call—a man he had known for almost 20 years was found dead under his quad. “He was the fourth guy I’d known personally who got killed in a quad wreck,” says Lloyd. Over the past 10 years, SAIF Corporation has received 414 injury claims related to ATV accidents, costing a total of $11,100,000—an average cost of $27,000 per claim. Of those claims, five were fatalities.

“We see a lot of injuries and a lot of fatalities,” says SAIF Loss Control Manager Chuck Easterly, “You just don’t want families to have to deal with this, it’s tragic.” 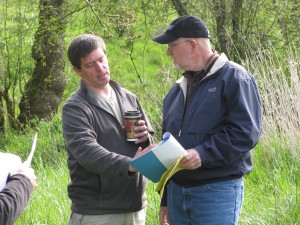 In an effort to reduce the number of farm ATV accidents in the future, SAIF and ABC partnered to develop a much-needed safety training video.

“I’d get a lot of phone calls asking if I knew of a video for ATV safety,” says Lloyd, “There wasn’t really anything available for the farm community.”

SAIF provided funding for the video which will be available for distribution in time for Farm Safety Week in September. SAIF hopes that the video will provide those working in agriculture with some insight on how to be better riders. “We think they know the basics but they need some key understanding,” says Easterly, “If we can just transfer those principals, maybe we can save a life.”

The video calls into question: is an ATV the right vehicle for the job?

“I really do believe ATV’s are the most dangerous tool we have for moving people around, and we shouldn’t use them if we don’t really need them,” says Lloyd. SAIF and ABC hope the video will help people to make better choices about safety and the vehicles they use on the farm. 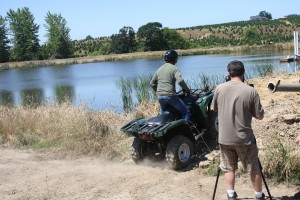 Lyon demonstrates how to be an active rider by standing and shifting body weight when going over obstacles on an ATV to lower the center of gravity and increase stability.

SAIF recruited ATV safety expert Steve Lyon, evaluator for Lyon Off-Road Certification Center, to collaborate with on ATV safety techniques. Lyon brought to their attention the technique of being an active rider by standing and shifting body weight when going over obstacles for a low center of gravity.

“I didn’t understand that myself until I saw Steve explain it,” says Lloyd, “It’s counterintuitive in a lot of ways. How does standing up lower the center of gravity? It does, but it doesn’t seem like it does.”

When the operator’s weight is transferred down to the feet, the weight is actually applied to the machine at a much lower level. Standing up on a quad gives the operator more freedom to move quickly in the direction he or she needs to, creating a quicker reaction time and more control of the vehicle.

“If you round up a bunch of ATV operators and tell them to wear helmets, they’re like—‘well I know that,’ ” says Lloyd, “But lowering the center of gravity, people don’t know that already, so they’re interested and willing to learn about it.”

Lyon also stresses the importance of body positioning and posture on an ATV for optimal safety. Where the operator is positioned will have a significant effect on overall stability. Assuming a 200-pound operator is on a 600-pound machine, the operator is about 25 percent of the total weight.  To counteract the forces that will be acting on the ATV when it is in motion, the operator must be an active rider, changing positions to maintain stability. Lyon recommends that ATV operators slide to the front part of the seat with feet positioned toward the rear part of the foot rest. He notes that many operators will sit on the back part of the seat cushion with their feet forward, making the ATV much more likely to back-flip on a steep climb.

“We need to get to where there are fewer crashes,” says Lloyd, “I’m getting tired of people I know turning up dead.” With the ATV safety video as a new resource, SAIF and ABC hope ATV operators will achieve a better understanding of why ATV’s behave the way they do.

“I think we can help our ag partners better understand what they can do to help their riders be better riders,” says Easterly, “We’re hoping that this is something that will make a difference both on and off the farm.”