Love Farm Organics: For the Love of Feeding People

Love Farm Organics feels like a place out of a children’s storybook. Two farmers—a husband and wife team—plant and work in the soil with their hands while their two young daughters play on the farm. The place is peaceful, with only sounds of rain teetering on the tin roof and roosters crowing. Although there is no red barn, there are free-range chickens and an attention-loving farmdog and farmcat. This small family farm loves feeding people, and appropriately so.

Love Farm Organics’ owner Amy Love is a 5th generation farmer, born and bred to grow food on homesteaded land her family has farmed in Forest Grove since 1905. As a kid she loved riding around in her father’s pickup to check on their 500 acres of berry fields, and picking and throwing strawberries at her cousins, giving each other what they called “strawberry shampoos.”

Amy spent 10 years after high school hiking and traveling the world, but she always knew that farming was what she wanted to do. She stayed in New Zealand to work on a sustainable agriculture farm, as well as Hawaii and Arizona to learn about organic farming. After graduating from college, Amy’s father, Jim Love, agreed to let her trial organic farming on a few acres of the family homestead. Little by little, as ongoing struggles became successes, he gave her additional acres to grow on. “He was openly willing to give me a try and always said, ‘We have unlimited land and unlimited water—what do you want to do?’” says Amy.

Amy learned conventional farming from her father but gained an interest in organic farming while she was studying botany and horticulture at Oregon State University. “I always sort of had the hippy kid in me,” says Amy, “I never wanted to be contradicting my father but it was sort of this dichotomy. I talked about hugging the trees, and he talked about cutting down the timber.” Despite their differences in practices, they always maintained a mutual respect. “Our values are really the same, it’s just a generation thing,” Amy says. Jim attends organic farming workshops with her, and she attends conventional grower workshops with him. “By experiencing things together we’ve been able to talk and communicate and open each other’s eyes,” says Amy. Jim says organic farming is the food industry’s fastest growing segment. “That’s where the market is right now, and it’s growing fast,” Jim says, “We’re in full support, and we’re just helping them out wherever we can.”

After trialing organic farming on several acres of the family homestead for five years, Amy and her husband acquired a 39-acre parcel of farmland, formerly known as the Willis Place. They started Love Farm Organics in 2005, a Community Supported Agriculture farm, to feed friends and family.

The first year the farm had three families participate as members in the CSA, successfully growing each year to 170 members today. Amy was surprised how much people really cared about where their food came from and how it was grown. “They want to know it was picked that morning, and that they can eat it later that night,” she says. Jim says that CSA members like to have a relationship with the farmer growing their food. “They want to take care of the land and the environment and minimize the use of chemicals and fertilizers,” he says.

Love Farm Organics grows everything from fava beans to kholrabi and squash from mid-May to early November, offering seven locations around the Portland Metro area where members can pick up their food shares each week. “It’s really important to me to meet all our members; I strive to know them all by face and name, and most of them I do. It’s important to us to have them know their farmers,” says Amy.

It’s because of that farmer-customer connection that Amy Love—loves what she does. “The food you buy in the store is getting further and further away from what we’re doing,” says Amy, “It’s lacking in flavor and all the things that are really important to us. I want to be able to provide the best tasting, freshest, safest food.”

Love Farm Organics works hard to do so, with just Amy and her husband working on the farm full-time and one year-round, part-time employee. Since they are committed to organic farming, they spend a lot of time doing manual labor, hoeing and hand-pulling weeds, planting cover crops like clover to add nutrients to the soil and fertilizing with fish fertilizer, feather meal and manure. “People are kind of finicky about what they eat, and they don’t want to pay a lot of money for it. There are challenges with people who aren’t used to seeing one little hole in their kale leaves,” says Amy. She wants people to know that there are a lot of inputs in getting food to look perfect. “We’re not trying to get people to eat something that doesn’t taste good,” says Amy. 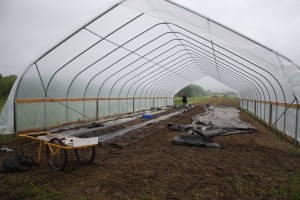 The new 30×100-foot cold-frame greenhouse that will enable Love Farm Organics to extend their growing season.

If their bounty didn’t taste good, they wouldn’t have acclaimed Portland-area chefs buying their produce to serve in their restaurants. Cabezon, Higgins, Blue Hour and the Tualatin Valley Country Club all have had Love Farm Organics produce in their kitchens. “It’s all about relationships when it comes to chefs,” says Jim, “It’s just kind of a trend right now.”

Love Farm Organics would like to expand their chef accounts, and a recent grant from the National Resource Conservation Service will help them with those efforts. The grant helped fund a 30×100-foot cold-frame greenhouse that will enable the farm to extend their growing season, providing more produce for chefs and CSA shareholders through the winter.

Love Farm Organics is committed to feeding hungry people, donating produce to women’s shelters, the Oregon Food Bank and anyone in need. “Anybody who is willing to work for anything isn’t going to go hungry,” says Amy. They allow any family who is willing to help out on the farm with weeding, planting and hoeing in exchange for produce. “We’ve picked up people at the bus stop in Forest Grove and sent them home with a bunch of food,” Amy says, “It’s worked out really well.”

Love Farm Organics loves feeding people, and they’re not afraid to do it in a way they feel is right. “I really do love the fact that what we do makes people feel happy,” says Amy. Her father will root for her all the way. “She’s my hope in carrying on the farm. I’m hoping she’ll be able to carry on the whole thing. Who knows, maybe in the next generation, they’ll convert the whole thing to organic,” says Jim. Until that day, Love Farm Organics will continue to grow food in a way they feel good about.