Within 10 seconds of meeting Bob Moore, the face and founder of Bob’s Red Mill, it’s instantly clear just how special this place really is. On a typical day at the Bob’s Red Mill headquarters, it’s not unusual to find Bob playing one of his two pianos in the factory—his executive assistant playing along on the piano next to him—bursting into song as employees look on, smiling and bobbing their heads to the music.

Bob is an 83-year-old native Oregonian and father of three sons. The first thing he will likely tell someone lucky enough to meet him is that in 2012 he celebrated 60 years with his wife, Charlee Moore. He might even share a few photos of cuddly kittens and puppies on his iPhone 4. Bob knows many members of the Bob’s Red Mill “family” by name, warmly acknowledging them as he passes by, desiring to connect with the loyal people who have helped make his business what it is today. 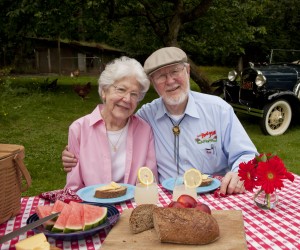 Bob and Charlee’s interest in whole grains started in the 1960s when the couple joined a church group in Redding, California. Charlee’s friends in the group enjoyed canning, baking bread and cooking with whole grains, so Charlee picked up the interest and committed to healthier eating—which appealed to Bob. It wasn’t until Bob stumbled upon the book “John Goffe’s Mill” by George Woodbury—a book about an archaeologist who revived an old mill to grind flour—that he became interested in the idea of a mill. At the time Bob was managing a JC Penny Auto Center in Redding.

In the book, George Woodbury didn’t know a thing about milling when he started, but when he did it, people beat a path to his door.

“It gave me a sense that I could do that, change directions in my life,” says Bob. “Once I read John Goffee’s book, I was locked into this whole thing as a way of life,” he says.

So he immediately started to do research. He went to the library to compile a list of flour companies and mills around the country, writing each a letter asking for help to acquire stone grinding mill equipment. He received just one response—from a mill that had not used stone grinding equipment in over 100 years. But they did know a man who had previously owned a mill in Indiana and who was knowledgeable about where to find them. Bob made a phone call, and he acquired his first stone grinding mill from Fayettesville, North Carolina.

He started a mill in a quonset hut, Moore’s Flour Mill, partnering with his sons in the business. Although the mill was successful, the town of Redding was not big enough to grow the business and support three families.

As a spiritual couple, Bob and Charlee always wanted to learn the Bible in its original languages. They sold their portion of the mill to their son and moved to Oregon to attend a few seminaries. Bob and Charlee frequently practiced learning biblical words while on a walk. They made vocabulary cards and took turns testing each other while they strolled near their home in Oregon City. One of these jaunts on Rothe Road changed their lives forever, as they passed what looked like an old mill with a big “For Sale” sign.

“I told Charlee, ‘you know, it’s crazy, but I think that’s an old mill.’ I could see the grinders and mixers; it had been closed for years,” says Bob. He later learned that a rail line used to carry grains to the mill, and when it was pulled out in 1957,

there was no longer an easy way to deliver grains there, so it closed. Bob and Charlee made a decision to purchase the mill, and Bob’s Red Mill was born. They started with 11 employees, making 100 different products, including 10-grain cereal and cornmeal.

“From the moment we opened that mill we were busy. It was amazing how people beat a path to the door,” says Bob. “People were interested in eating better, and of course we kept hounding the whole grain idea and stone grounding,” he says.

Though business was thriving, Bob’s Red Mill experienced a major setback. On June 15, 1988, an arsonist set fire to the mill, devastating the whole building. Starting over seemed like such a big feat that Bob considered leaving the business behind. He went as far as talking to a manager at Les Schwab to discuss the possibility of employment there.

But Bob had such a strong support system of people telling him to stay in business. Even Fred Meyer stores, Bob’s Red Mill’s largest customer at the time, kept his shelf space open with a sign announcing the mill’s tragedy. His employees stuck with him, helping to salvage equipment from the burned building. Bob had insurance to cover a loan from the bank, and when he received a check from the insurance company after the fire, Bob’s banker told him to keep the money. “He was one of the forces that kept us in business,” says Bob.

For a few months after the fire, Bob’s Red Mill was able to keep product going. One of his employees traveled to Redding in order to continue milling product at Moore’s Flour Mill, shipping it back to Oregon. Within six months they were back on their feet, renting out several properties in Milwaukie, and in 1989 they found a permanent facility in the same part of town.

Bob’s Red Mill continued to grow, and five years ago the headquarters was moved a mile and a half down the road in 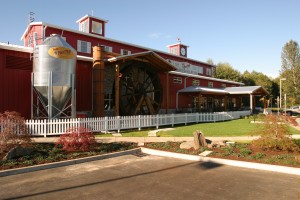 order to house 250 employees and keep up with the demand of production. Today the mill runs 24 hours a day, six days a week to make 400 different products—everything from old-fashioned rolled oats to garbanzo bean flour to gluten-free pancake mix—with grains that are sourced from all over the world, including Oregon farms. Products are sold in 71 countries around the world, in countries as far as Mongolia, Saudia Arabia and Iceland. Bob’s Red Mill is well on its way to achieve its mission to be a major source of whole grains to the world.

“I really believe in whole grains. From a biblical standpoint the Bible tells us to eat whole grains,” says Bob. “Whole grains were given to us by God, to eat by God. It gives me inner strength to say I would like to take these grains and make them available to the world. And it’s not my idea,” he says.

Not only is he concerned with feeding the world healthy food, but also the well-being of the Bob’s Red Mill “family,” and the community. On Bob’s 81st birthday in 2010, instead of receiving a gift, he gave his employees a tremendous one—his company—through an employee stock ownership program (ESOP). Bob says that the people at Bob’s Red Mill are just as important as the products, and he was determined to do with the company what he thought was right. He spent nine years researching the program and decided it was the right way to go. “You can’t take it with you,” says Bob. This decision received so much media attention that he appeared in a televised interview with Diane Sawyer, and was a contributing factor to a book just written about his life—“People Before Profit: The Inspiring Story of the Founder of Bob’s Red Mill” by Ken Koopman.

He decided to use the profits from the ESOP for philanthropic efforts, donating $1 million to the National College of Natural Medicine to fund the Ending Childhood Obesity Project as well as build a test kitchen so students can develop healthy recipes. He gave $5 million to Oregon State University to develop an academic center to research nutrition and child obesity issues, and he committed $25 million to OHSU for a new research and development department to promote science-based changes in diet, nutrition and healthcare with a focus on whole grains.

Bob wants people to know that Bob’s Red Mill is all about “complete,” healthy, food, and stands by whole grains as the healthy way to eat. “No one else was doing this—somebody needed to do this,” he says. “And from when we tried it, people liked our stuff. It’s hard to shy away from that. I think there’s some energy in just supplying people good food.”