From Dairy to Dahlias…

Nick and Margaret Gitts took a big leap when they purchased an Oregon dahlia business, uprooting their family and leaving their Washington dairy behind. The couple grew dahlias as a hobby in the 1950s, operating a small dahlia business known as Laurel Valley Dahlias, but the dairy farm was their livelihood. Switching from a steady, consistent 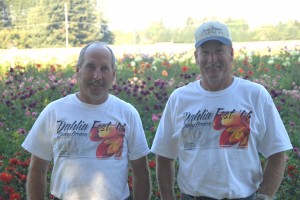 income at the dairy to a seasonal business that generates income for only a short period was a challenge and a risk.

“Dad fell in love with them,” says Nick’s son, Nicholas Gitts. Growing dahlias was his passion, and he loved hybridizing new varieties.

In 1963 the owners of Swan Island Dahlias were traveling around the country visiting dahlia growers. They were ready to retire from the business and wanted someone with a strong knowledge of growing and selling dahlias to take over. They felt that the Gitts did a great job at growing the flowers and could handle the transition well, so they approached the couple about buying their company.

The Gitts made the purchase, and they moved their family down to Canby, Ore., where Swan Island Dahlias has resided since the 1950s. The company was started by the previous owners in 1927, named after Swan Island in Portland where the farm was originally located.

“Dad had farmed his whole life, so working the tractors and other machinery came very easy,” says Nicholas.

While most aspects of running the business came easy, their challenge was organizing a budget plan to get through the period of the year when flowers aren’t growing and no income is coming in. They set up an operating credit line to cover expenses until income from their dahlia catalog sales began in January each year. Then they learned to carefully follow a budget to get through the year.

After nearly 50 years of owning Swan Island Dahlias, it’s clear that the Gitts family made no mistake in buying the company. Swan Island Dahlias is the largest and leading dahlia grower in the United States. The family grew Swan Island Dahlias from 20 acres to 45 acres, offering more than 350 varieties of dahlias to customers and selling about 600,000 tubers each year. “Every year we create thousands of new ones,” says Nicholas. His father loved dehybridizing dahlias, so they continued the tradition after he passed away three years ago. Only the exceptional new varieties—about 10 to 15 each year—are selected to be marketed to customers.

Swan Island Dahlias is a family operation of about 15 employees in the summer and 30 in the winter, with Nicholas and his brother Ted Gitts now owning the business. Their kids work for the company as well; Nicholas’ two daughters are office staff, managing the web site. Ted’s son works in the wholesale department, doing inventory and helping with work on the farm. When Nicholas and Ted decide to retire, their kids will take over the business.

Swan Island Dahlias has remained strong through the recent economic recession with thriving cut flower sales. The cut flowers have been so popular that they have to ration sales to avoid running out too early in the season. Finding additional land to grow on in Canby has been another challenge, limiting their ability to expand cut flower production. In the 1980s the business was 80 percent wholesale and only 20 percent retail. Today their ratio is 85 percent retail in order to get by with less acreage. But they haven’t given up the search for more land just yet as they look to expand the cut flower market.

Every summer Swan Island Dahlias puts on a Dahlia Festival for the public to enjoy, an event started by the original owners. The first events were small, a one-room show attracting about 200 visitors during the week-long event. The Gitts have grown the event over the years, and today guests can view more than 400 floral arrangements of  more than 15,000 dahlia blooms. 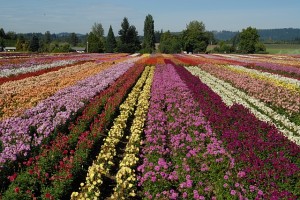 Swan Island Dahlias is proud to be able put on the largest display of dahlias by one grower anywhere in the United States. “We hire approximately 20 florists to arrange the cut dahlias each Friday. It takes a crew of 12 to cut the 15,000 blooms and four or five to transport the flowers to the showrooms. Along with all the time spent building shelves and getting the showroom ready the total man hours is well over 500 to set the first weekend,” says Nicholas.

The festival is free and open to the public, featuring floral arrangement demonstrations, live dahlia tuber dividing demonstrations, talk on dahlia culture, and dahlia Q&A. Visitors can stroll through the farm to view more than 40 acres of dahlias in full bloom. Today this event draws an impressive 25 to 30,000 attendees over the course of two three-day weekends.

“What I love about the business is that everything here changes with the seasons. From planting in the spring to seeing the new plants come through the ground. Then the first blooms each season makes us appreciate what we do. Then to see the fields in full bloom is something we try not to take for granted,” says Nicholas.

It’s that appreciation for what they do everyday that has made Swan Island Dahlias successful for so many years. Pay them a visit this summer and see for yourself.