Subscribe to our RSS feed
Posted by
Cassandra Wick

On of the longest standing family orchards in the Rogue Valley

Nestled in the foothills surrounding southern Oregon’s RoxyAnn Peak is a Century Farm called Hillcrest Orchard. They are one of the longest standing family orchards in the Rogue Valley and are accompanied by RoxyAnn Winery Purchased by Reginald H. Parsons and Maude Bemis Parsons in 1908, the orchard remains property of the Parsons Family under the company name Hillcrest Corporation. While the property and company have endured many changes during its one-hundred-years there is one thing that remains constant, the commitment to sustainability and innovation and keeping true to Oregon Agriculture. “We’re honored to be recognized as a Century Farm in Oregon. It’s significant given the very small percentage of our population that continues to farm”, said Spencer Davenport, the Controller for Hillcrest Corporation

Hillcrest thrives in a valley where the pear market is supported by ideal soil and weather conditions. The orchard sits at approximately 1,400 feet above sea level and is surrounded by protective mountains. The area is favored with a mild climate, summer temperatures average a low of 50 degrees Farenheight and a high of 83 degrees Farenheight. On average, the valley receives 18 inches of rainfall with most occurring from October to May. Medford ranks second in pear production in the state to Hood River Valley and combined the two valleys produce enough pears to give each person in the state 294 pears every year. 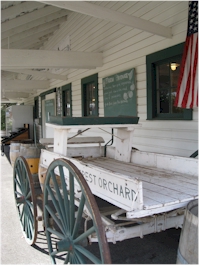 RoxyAnn Winery, sharing the same property as Hillcrest Orchard along with many of the same owners has brought an entire crowd to the grounds where the pears are picked and produced. The scenic landscape, beautiful outdoor event area, and the tasting room have attracted people that would otherwise not know the story of Hillcrest Orchard and their deep roots. “RoxyAnn is like the carrot for the public that brings a lot of people to the property” said Davenport. The grassroots approach to marketing has worked in the favor of Hillcrest with RoxyAnn sharing their land.

The growth and success is not only attributed to the presence of a highly successful vineyard and tasting room but to the practices and commitments of the management and employees. Being a business that is supported by consumers that are making a decision to purchase local wines and fruit, they in turn are doing what they can to be sustainable and responsible to their state economy. According to Grant Slagle, a Portland area RoxyAnn wine representative, “the entire property where Hillcrest Orchard and RoxyAnn Winery sits has recently received their LIVE award”.

The LIVE award is a program that monitors farming and winemaking to assure that practices are in line with sustainability, healthy land and safe water. By taking extra precautions with their land, Hillcrest Orchard and RoxyAnn Winery have certified over eighty acres of vines and over 50 acres of Pears, making the entire property LIVE certified and Salmon Safe.

In the last year, Hillcrest has had to make some difficult decisions regarding their land and the economic stability of their business. While pear sales dropped about 30 percent compared to last year, there is a great deal of optimism about the future. In addition to a teetering economy, the decision was made to, “push out 26 acres of low yield trees” said Davenport. Most of the trees removed consisted of primarily comice with some bosc, red Bartlett, forrelles, stark crimson trees as well. “Some of the trees that were taken out were over 100 years old”. It hasn’t been decided yet what the low yield trees will be replaced with and there are no plans to develop the land anytime soon.

Like so many family farms that are facing difficult decisions, Hillcrest Orchard and RoxyAnn Winery are making every effort to be an exceptional presence in the world of Oregon Agriculture. “The winery has a very long-term approach to an industry that can require great short-term successes” says Slagle.