Subscribe to our RSS feed
Posted by
Cassandra Wick

Thirty-five short miles from the Portland Metro area is an expansive and blossoming farm with an inspiring story to tell. Roughly 1,000 acres of blueberries, hazelnuts and grass seed are under the management of Verne Gingerich, a fourth generation farmer on this land. Gingerich Farms has been in operation since 1919 when the Gingerich family homesteaded here in Oregon and has been dedicated ever since to responsibly managing their business.

“We are fully integrated here,” says Verne Gingerich, owner of Gingerich Farms. “We pick, pack and sell the blueberries and hazelnuts.” Having control of the product from seed to sale has been one of the many factors leading to a successful farming operation. Gingerich Farm’s produce blueberries make their way across the United States every season due to the demand for their tart and sweet flavor. “We have a very strong market across the country and that is because people want a quality product,” says Gingerich. 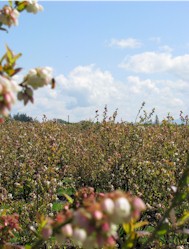 Gingerich Farms is passionate about their farm, and that includes ensuring that the farm is sustainable for future generations. They are currently restoring a creek that passes through the property. This includes reintroducing native plants and monitoring the water quality as it enters and exits the property. “We want to measure our impact and see if we were contributing to the pollution of the stream water”, says Gingerich. “We are take being environmentally sound very seriously.” In addition to restoring the natural habitat around their creek, they have also added 22 acres of organic blueberries. “It is a commitment of time and money and we’re not sure it will work,” says Gingerich. It will take a crop three years to become organic certified, which is also how long it will take for plants to produce harvestable fruit. This will be the first year that the fruit will be picked and sold as organic certified.

At a strategic planning session held two years ago for the Gingerich family and staff, the question was raised, “how do we give back to the community?”. From that session, an idea was presented by one of Gingerich’s employees to begin offering a program similar to the Community Supported Agriculture (CSA) projects that many urban Oregonians are beginning to participate in. Prior to this project, Gingerich Farms did not sell directly to the public. Now, four times a year, the public has the opportunity to buy Gingerich Farms blueberries fresh and frozen at wholesale cost. Through their mailing list they will make the announcement of the sale and invite folks out to see their farm and purchase their berries at the same cost the store would pay. “It has been a great public relations tool for us to have folks come out, take a tour of the property and get a taste of our blueberries,” says Gingerich. “It is a lot of fun for us.”

Last year Gingerich Farms invested in the building of a new production house and add some features to make their operation more environmentally sound and sustainable. While giving the tour of the new packing plant Verne had more enthusiasm than a child at Christmas. New sorting machines have computers that make more than 600 decisions per second about the quality of the blueberries as they pass over advanced sensors, making quality control a much simpler process. Gingerich has also taken the opportunity to install special window panes in the many windows in the plant and extra insulation. “This allows us to keep the facility cooler and use more natural light instead of consuming so much electricity,” says Gingerich. “We also moved the loading dock area and installed a roll-up door to keep the outside heat from affecting the rest of the facility.”

Not only will these improvements cut down on cost for Gingerich Farms but, being sustainable it is a step that “we are very proud to take” says Gingerich. For more information about Gingerich Farms please visit their website at www.gingerich.com.